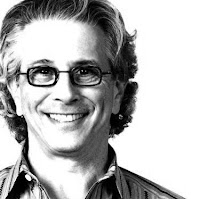 Update: Video of Edward's presentation at the bottom of this post.
This is how we'll kick-off the third season of Conversations About The Future Of Advertising—with an impassioned presentation by Edward Boches (@edwardboches), Chief Creative Officer/Chief Social Media Officer, MULLEN (Boston) on his personal evolution as an agency leader in the face of historic change.
Edward believes everything has changed, but the real change is the individual's new power, influence, participation and control: both as a consumer and individual.
So, what does that mean for agencies and marketers in 2010? Edward will speak from 20+ years as an national agency creative director and executive on the classic innovator's dilemma—how do you change into something new without losing the value of something established?
All this and more will be wrestled to the ground on Monday, February 8, 2010 at the Fine Line Music Cafe 318 First Avenue North in Minneapolis.
The event is free. No RSVP required. Just show up.
Doors open at 5:00pm. Edward's presentation starts at 6:00pm—sponsored by the Minneapolis College of Art and Design and the Minnesota Interactive Marketing Association.
BIO: Edward is one of Mullen’s four original partners. Over the last 26 years he has helped define the agency’s creative standards, established its public relations group, integrated digital design and production into all of the agency’s operations, and most recently launched its growing social media practice. The latter -- comprised of strategy, PR, content and analytics -- is both a department and a mindset working to master marketing in the new consumer-driven world. Along the way, Edward has been an award winning copywriter, a celebrated creative director, and a never-ending advocate for ideas that build businesses. His work has introduced new brands (Nextel, Monster.com, Lending Tree, Oxygen Media) and invigorated established companies (Timberland, GM Credit Card, Stanley, Four Seasons). During his tenure, Mullen has grown from a 12-person creative boutique to one of the country’s top 25 agencies, with 600 people in four offices. Edward is also the Editor in Chief of TheNextGreatGeneration.com.
Posted by CATFOA at 11:08 PM

About the speaker series

CATFOA
Minneapolis, MN, United States
Hosted since 2007 by Tim Brunelle, creative enterprise leader, entrepreneur, teacher and former President of the Minnesota Interactive Marketing Association—CATFOA seeks to improve the quality of interactive marketing and advertising developed in the Twin Cities through enlightening interviews and their resulting conversation.